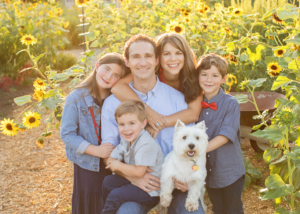 Dr. Fineman is an Idaho native, he was born and raised in Idaho Falls, ID. This is also where he found his love for veterinary medicine. As with many in the veterinary field Dr. Fineman felt that he was drawn to this career, but unlike many, it wasn’t until later in life that this was clear. He has always loved animals and working with them, but it wasn’t until high school that he truly became passionate about the veterinary field. Working as a job shadow at a local clinic in Idaho Falls, solidified in his mind that this was the path he wanted to follow.

After graduating from Idaho Falls High School, he attended the University of Idaho where he received his bachelor’s degree in Animal Science. This was also the place where he and his wife met. So not only did U of I have a great part in who he became as a vet but also impacted his personal life significantly.

After vet school, Dr. Fineman began practicing medicine in Northern Idaho, Sandpoint to be exact. He practiced there for almost 4 years. He then moved back to Southern Idaho and has been practicing in the greater Boise and Meridian area for the past few years.

Coming back to this area is much like coming home for Dr. Fineman and his family as they have many family members and friends who live here in the area.

When not practicing medicine, Dr. Fineman is a family man, spending time with his beautiful wife (Elizabeth) and three wonderful children (Callie, Mason and Oliver) and their various assortments of animals, currently made up of two cats (Earny and Brodie) and their dog, Dixie.

The Fineman family loves to go adventuring together whether its road trips, camping, biking, skiing or just simply relaxing at home.